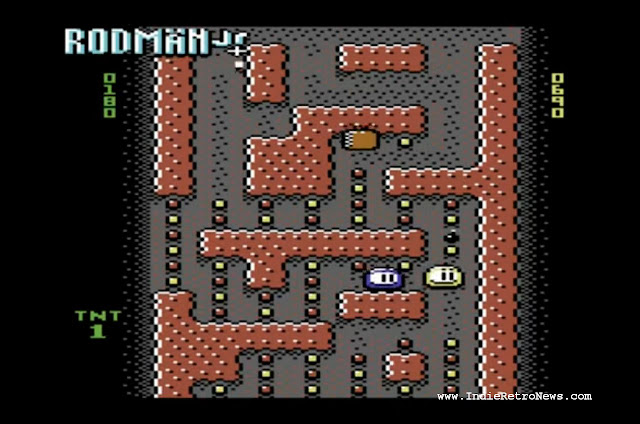 It feels like it was only just yesterday that we announced Misfit’s ‘ Rodman ‘, a multi-platform Pac-Man style game with some very cool yet unique differences, that put you in control of Rodman who must collect all the dots in each of the many maze levels while avoiding enemies such as Naughty Nic and Dirty Tim. Well here we are with another RodMan story, as we’ve just found out through a good friend of ours, that Misfit has also recently released RodMän Jr and RodMän Jr+ Advanced; A charming C64 game as a Reset64 4KB Craptastic game competition entry!

Here is what the website says about the game : Rodmän and Rodwina have an offspring. The dirty b**** called Junior. He must avoid annoying and stupid monster twins Nic and Dave and collect colourful pills. And there are bombs too. Junior can destroy enemies or doors. The main problem is a scrolled world which means that Junior does not have too much time to make complicated plans. So yes if you loved RodMan, which was originally released for the VIC-20,C64,C16,ZX Spectrum, Atari 8bit,Oric,MSX and Amstrad you’ll sure to love this game on your C64 too!